Fashion Designers at the Opera – Book

… of equal appeal to both fashion and opera devotees, the book provides a fascinating insight into both worlds’ 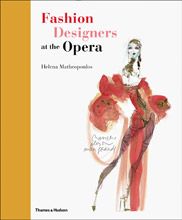 Fashion and opera are natural arenas for collaboration. The most theatrical of arts has inspired the most visionary fashion designers. In 2009–2010 alone, Viktor & Rolf, Miuccia Prada, Emanuel Ungaro and Christian Lacroix made successful sorties as costumers for operas all over the world.

This sumptuous book profiles leading figures in the world of fashion, together with their dazzling costume designs. Interviews illuminate the journey that led each to the opera and the challenges of working in a new medium.

The book includes designs for Don Giovanni, Carmen, Aida, Così fan tutte, The Magic Flute and many other operas staged at such opera houses as the Royal Opera House in Covent Garden, La Scala, the Metropolitan Opera, the Arènes de Nîmes and more.

Includes Over 200 illustrations, including designers’ sketches and photographs of the costumes on stage.

Helena Matheopoulos, a former fashion editor of Tatler and a regular contributor to The Times, Gramophone and Opera Now, has also published several books on opera, including Placido Domingo and Diva: The New Generation